Take a step back in time as you visit some of the areas I will mention here in the article.   It is a great way to experience the Smokies and learn of it’s diverse history, including the people that once lived  worked and vacationed in the area. History abounds here and you are sure to lose yourself daydreaming of an era long gone but not forgotten.

THE WONDERLAND HOTEL once a vibrant tourist attraction which first opened for business in 1912.  The two story structure had 26 guest rooms, carefully designed so that no two were alike, and each sported a private bath a luxury for that day and time.  The area became The Great Smoky National Park in 1934. The hotel remained opened until 1992 among many changes within the park and life itself.  Unfortunately in1995 fire took some of the structure, in 2006 the rest collapsed.  The park collected some items (boards/windows) and the buildings around the hotel were slated for restoration.  Sadly on April 19th, 2016 a fire also took out the annex.  Today what is left of the hotel along with the entire Elkmont District is listed as one of 11 most endangered places by the national Trust for Historic Preservation. The following was taken in Elkmont District. 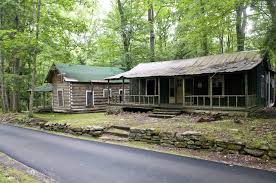 CEMETARIES IN THE GREAT SMOKY MT NATIONAL PARK   A total of more than 151 known cemetaries exist in the national park some date to the 1800’s. 20 cemetaries around Fontana Lake became inaccessible by land with the building of the dam, still accessible by ferry.  A cemetary also exists in the center of Gatlinburg. For more on White Oak Flats Cemetary check out our earlier blog article Hidden in the Heart of Gatlinburg.

HISTORIC BUILDINGS  The Great Smoky National Park has over 90 historic structures, houses, barns, schools, churches, outbuildings and grist mills.  Check out the map and put a few on your list to see when you visit. 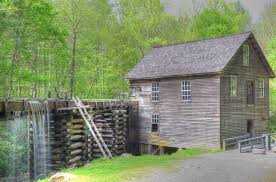 CIVILIAN CONSERVATION CORPS CAMP Created during the depression to provide work and wages for young unemployed men many of the trails, bridges, campgrounds and buildings still stand today as a testament to their work.  For a brief history on how the park was created and the part the CCC played in helping to build it click here

There are lots of fun things to do and see in the area, I hope you will choose at least one thing off this list and take a few moments to reflect on the history of the area, the people who lived here and the great privilege we have of enjoying such a diverse, historic and beautiful area.

Logging…Loving…Leaving…Life The Story Of Elkmont

As logging began to make the area more accesible the tourism trade grew. Townsend sold some of the land to outdoor and hunting enthusiast who soon began to build summer cottages. The former logging camps of Elkmont and Tremont were turned into vacation destinations which led to the creation of the Wonderland Hotel and the Appalachian Club.

By the 1920’s many people began to notice how the logging operations had devestated the land and the push for a national park began.  The problem with the national park idea was that the land was owned by private residents and the Little River Lumber Co which did not want to leave.  In 1924 a compromise was worked out with Colonel Townsend to sell 76,500 acres of land but allowed to log it for the next 15 years.  This was only one of many such “deals” that would need working out before the land now knows as the Great Smoky Mountain National Park came to be.

The area now known as Elkmont was purchased in the 1930’s as part of the park deal with the current residents being offered lifetime leases but renewed every 20 years.  The last lease was renewed in 1972  but denied renewal in 1992.  The problem was what to do with the buildings, the park service desired to tear them down and remove them but the past lease holders had other ideas wanting the structures preserved.  Many of the structures were granted a place on the National Register of Historic Places and therefore could not be torn down, more controversy, more compromise.

Elkmont is now an active campground with the abandon residences as a testament to it’s past.  The Wonderland Hotel has already been demolished and 56 other structures are slated for tear down.  Structures in the Daisy Hill section will remain and be restored as a static display to remind visitors of an era and the history that brought about the idea for a national park.  The Appalachian Club has already been restored as has the Spence Cabin and are available for day use for events such as weddings/receptions, family reunions, celebration events and business meetings.

The Smoky Mountain area is rich in history, controversy, bio-diversity and well all things that make up the cylce of life.

We sure have it made compared to the mountain folk of the mid-19th century.  I can’t imagine living in the small cabins they called home, especially in chilly winter temps with the wind whistling through all the cracks and down the chimney!  The typical cabin was 18 X 20 (360 sq ft), frequently with a sleeping loft.  The cabins may have been small but the families normally large.  Usually the log home would house multiple generations including grandparents and 5 -12 kids!

Life was simple yet hard.  They lived off the land and in winter while fresh produce was sparce if crops had been good and livstock prolific they had plenty to eat.  They would dry, salt, pickle, and sulphur things to make sure the family would eat well.  Some items their diets may have included are:  chicken, corn bread, pickled vegetables, dry green beans, squirrel, sorghum molasses, potatoes and salt pork, sulphured apples.

Winter was the time when most children attended school since they were not needed to work the farm.  The school year lasted only 2-4 months of the year and cost about $1 per student per month for the family to have their children educated.  Typically a child only went to school for a 3-5 year period enough to learn basic reading, writing and math skills.  Two country schools are preserved in the national park. Little Greenbrier School is accessible in winter by the 0.7 mile Metcalf Bottoms Trail which begins at Metcalf Bottoms Picnic Area. Beech Grove School is beside the road in Cataloochee Valley.

To pass the time indoors during the wintery weather the mountain folk would play music and sing songs.  Ballads were written about life events, tragedies, and local places.

The woman sewed quilts made from leftover scraps of cloth, worn out clothing and scraps of sack cloth.

I like to imagine what it would have been like for those hardy people to farm the land enjoy the fruit of it and the beauty too but I will admit I like to do so in the comfort of my climate controlled home in my very comfortable easy chair with a stocked refrigerator not far away!

Posted by cluffcabins on December 30, 2013 in Area History

Gatlinburg was settled in the early 1800s, however at that time it was called White Oak Flats (a cemetary still bearing the name White Oak Flats is located in downtown Gatlinburg, more on that in another post) for the abundant native white oak trees covering the landscape. It is believed that a middle-aged widow, Martha Jane Huskey Ogle, was the first official settler here. She came with her family to start a new life in what her late husband described as a “Land of Paradise” in East Tennessee. Soon after, the familiar family names McCarter, Reagan, Whaley, and Trentham took up residence along local streams and hollows.

There are many stories as to how Gatlinburg got its name, all involving a controversial figure who settled here in 1854. Radford C. Gatlin opened the town’s second general store, in direct competion with the first store opened 4 years earlier and owned by Noah Ogle.  Gatlin took the initiative to secure a post office and when the town’s new post office was established in 1856, Gatlin named the destination Gatlinburg. By all accounts, Mr. Gatlin was a flamboyant preacher, establishing his own “Gatlinite” Baptist Church. He was a democrat in a republican community, and for reasons which remain unclear, he was eventually banished from the area. But he had the last laugh:  the city still bears his name.

The other major Sevier County tourist town got its name from the first business established in the area, an iron forge built around 1820 by Isaac Love on the bank of the Little Pigeon River near what is now The Old Mill. Of course, that still begs the question: ‘How did the Little Pigeon River get its name?’Just as you might guess, the river’s name comes from the fact that great flocks of pigeons once filled the skies and trees in the area — Passenger Pigeons, to be specific. The town fared better than the particular breed of pigeon for which it was named. Passenger Pigeons, once among the most numerous birds in the world, were hunted into extinction by the early 20th century.

Sevierville (Severe ville) is named for John Sevier, one of the

leading figures in the history of Tennessee. Sevier was a frontiersman, soldier, war hero and politician who served under George Washington in the American Revolution and distinguished himself at the battle of King’s Mountain.

In 1784, he became the first governor of the State of Franklin (set to become the 14th state) a new state that had been carved out of the land around Watauga. Later, Franklin became part of North Carolina and John Sevier was accused of treason for resisting the annexation.